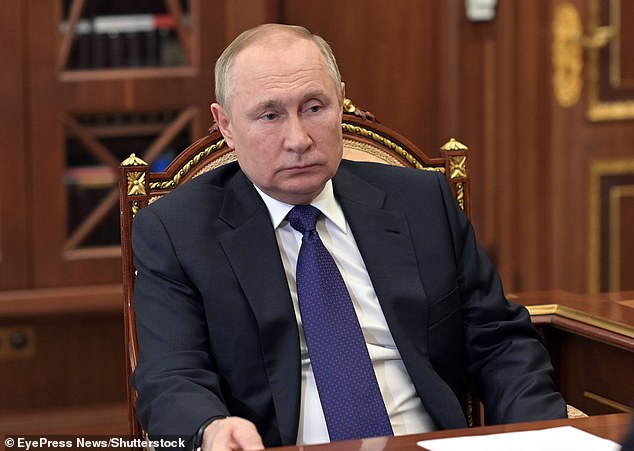 Russia has included Australia in a list of 50 countries that took “hostile actions” against it following Vladimir Putin’s invasion of Ukraine.

Moscow released the list on Monday after being hit by Western financial sanctions.

All business transactions with companies and individuals from so-called “hostile countries” must now be approved by a government commission.

Australia is on the list after imposing travel bans and financial sanctions on President Putin and his cronies and also sending missiles and bullets to help Ukraine.

Russia included Australia in a list of “unfriendly” countries released on Monday. Pictured: Putin on March 1

Ukrainian President Volodymyr Zelensky has vowed to kill ‘all b*stars’ who targeted civilians fleeing the country’s war-torn areas after harrowing footage emerged of a family lying dead on a road as security forces Vladimir Putin’s invasion continued to bombard the region.

The country’s leader said the family of four were “just trying to escape” from the town of Irpin, located on the outskirts of Kyiv, when they were killed in an attack by Putin’s forces.

He vowed to hunt down ‘all the b*stars’ who fired on Ukrainian towns and its people and to ‘punish all those who committed atrocities in this war’ before adding that the country ‘will not forget’ .

In a televised address, Mr Zelensky said: ‘A man, a woman and two children. Just on the road. …when they were just trying to get out of town. To escape.

The Ukrainian President continued: “We will punish all those who have committed atrocities in this war. On our land. We will find every b*stard. Who shot at our cities, our people. Who bombarded our land. Who launched rockets. Who gave the order and pressed ”start”.

‘There will be no quiet place on this Earth for you. Except for the grave.

Kiev has rejected Russia’s offer of “humanitarian corridors” to evacuate civilians after it emerged that several were leading into Russian territory or its close ally Belarus (top). Red Cross workers in Mariupol also said one of the routes identified by Russia for civilians to leave the town was covered in landmines.

Hundreds of civilians are today fleeing the town of Irpin, west of Kyiv, after coming under heavy attack by Russian forces in recent days as Putin’s men attempt to encircle the capital.

The stern warning comes after gruesome footage showed four members of the same family, including two children, lying motionless on a pavement next to their suitcases after trying to flee Irpin, a town 20km from Kiev, on Sunday.

Footage has emerged of grieving Ukrainian parents of an 18-month-old boy crying over their son’s corpse after the toddler was killed by Russian shelling in the southern city of Mariupol.

Today Kiev rejected Moscow’s offer to open “humanitarian corridors” when it emerged that some of the roads led directly into its territory.

Hundreds of civilians were pictured fleeing the town of Irpin, west of Kyiv, which has been the scene of heavy Russian shelling in recent days – helped across a partially destroyed bridge by members of the Ukrainian army who blew it up. days earlier to slow the Russian advance.

During a third round of peace talks between Russia and Ukraine on Monday, Russia revealed its demands.

Moscow is asking Ukraine to cease all military action, to change its constitution to enshrine neutrality so that it cannot join the EU or NATO, to recognize Crimea as Russian territory and to recognize the breakaway republics of Donetsk and Lugansk as independent territories.

This was the most explicit Russian statement to date regarding the conditions it wishes to impose on Ukraine to end what it calls its “special military operation” in Ukraine, which is now in its final stages. 12th day and resulted in the deaths of hundreds of civilians.

Russia has long demanded that Ukraine agree to exclude NATO membership. In 2019, then Ukrainian President Petro Poroshenko signed a constitutional amendment committing the country to strive for NATO and EU membership.

A view shows a residential building damaged by recent shelling, as the Russian invasion of Ukraine continues, in Chernihiv, Ukraine, March 3, 2022

The beach at Kiawah Island, South Carolina, ranks among the best in the country: List

Kiawah Island beach in South Carolina ranks among the best in the country: List