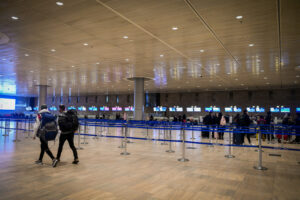 The move will allow Israelis to travel again anywhere in the world without needing special government permission, or to self-quarantine for a week upon their return – provided they are vaccinated.

The list of “red” countries was originally drawn up to slow down the arrival of the omicron strain to Israel, but due to the major outbreak of omicron in the country, officials consider travel bans unnecessary.

The latest data from the Health Ministry showed that 7% of cases recorded last week and 4% of cases the day before were from people returning from abroad. A few days earlier, their number was over 20%.

The list has already been significantly shortened, but currently still includes key destinations such as the United States, Great Britain, United Arab Emirates, Turkey and Switzerland.

From Sunday, January 9, foreign nationals from non-Red countries will be able to enter Israel without needing special permission for the first time since late November, provided they are fully vaccinated according to Health Ministry criteria .

Next Six Nations campaign set to start behind closed doors

Report: Israel to revoke ‘red’ country list today, lifting ban on travel to US and UK

The beach at Kiawah Island, South Carolina, ranks among the best in the country: List

Kiawah Island beach in South Carolina ranks among the best in the country: List